BACKGROUND: The Penn Yan Academy Athletic Hall of Fame Committee was established in 2010, with the first class of inductees entering the Hall of Fame in September of 2011. The goal of the Hall of Fame is to recognize individuals and teams that have made significant contributions to the Penn Yan athletic program. In recognizing these teams, athletes, coaches, and contributors, the Hall of Fame helps to connect today's student-athletes to their predecessors and create a deeper understanding of Penn Yan Academy's rich athletic history. The Honorees are inducted as part of the Homecoming Week festivities during the Fall sports season. The induction ceremony starts with a dinner at the Academy, followed by the program in the auditorium. Inductees are also recognized at the Homecoming football game. Plaques are housed in the display case outside the Academy gymnasium. For ticket or program information, please visit the web page at a later date.

The Athletic Hall of Fame Award is given for achievement in one or more of the following areas:

Varsity Letter Recipient: Served with distinction in interscholastic athletics as evidenced by more than one of the following: honors/awards received from Penn Yan Academy, league, state or national.

Coach: Served with distinction in one or more varsity sports. Went above and beyond basic expectations as a coach, and maintained appropriate perspective of the intended purpose of interscholastic athletics. Made proper ethical decisions and treated all players with respect and worked toward developing more than just athletic skills.

Team: Served with distinction the values and morals of not only Penn Yan Academy, but the Penn Yan community as a whole. Worked hard as a team and were not judged based on wins and losses, but the dedication they had to the school and the other members of their team. 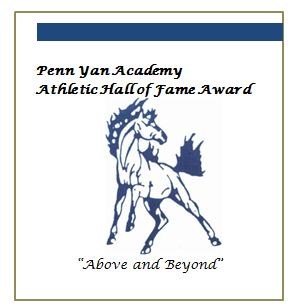